In order to improve medical care by reorganizing spaces and countable resources beds, implemented from 2008, the “Hospital without bricks” in the health care units of the Mexican Social Security Institute. In response to the dynamics of the epidemiological profile, which has been modified directly related to demographic behavior, the elderly population is growing compared to the pediatric population. This is reflected in the demand for consultations for adults and older adults in emergency departments, which occupy more than 50 % of care for chronic diseases without control and complications thereof; mainly by DM2, renal failure, hypertension, stroke and heart blocks, which all of them require hospitalization. Therefore the “Hospital without bricks” is a mechanism to reduce congestion in the emergency department and increases the availability of beds in hospitalization services. The redesign of the hospital’s process is possible on the basis of the analysis of occupancy rates and use of existing spaces, allowing the number of beds reorganize and optimize the occupation of critical services. Along with other programs such as ‘Puerperio de Bajo Riesgo’, ‘Cirugía de Corta Estancia’ and ‘Sala de Altas’, the success rate can rise to 100 %.

70 years after its creation, the Instituto Mexicano del Seguro Social (IMSS) is responsible for the health and social security of 58 million enrollees and 12 million IMSS-Oportunidades Program beneficiaries. However, we must recognize that IMSS faces a difficult financial picture caused by a combination of factors. These factors include the demographic transition and the epidemiological transition facing our country, which have exerted considerable pressure on the finances of the Institute.

On the one hand, IMSS now serves an exponentially aging population that requires costly medical services mainly related to chronic degenerative conditions such as diabetes mellitus, cerebrovascular disease, hypertension, and different types of cancer;1 on the other hand, the available infrastructure of hospitals and family medicine units has an enrolled population that has increased every year from 23.4 million enrollees in 1990 to 39.2 million in 2012, impacting the indicator of beds per 1000 enrollees.2

This is reflected in adults’ and seniors’ demand for emergency department consultations, receiving more than 50% of the care for uncontrolled chronic diseases and their complications, mainly due to DM2 and renal failure, hypertension, stroke, and heart blocks, which frequently require hospitalization.

In order to improve resource availability and the opportunity to care for enrollees, IMSS designs, develops, and implements strategies using the available resources in order to respond to current epidemiological and economic challenges.

Strategic projects and programs related to medical service infrastructure naturally correspond to the Coordinación de Planeación de Infraestructura Médica. Its main function is to assist in the modernization and expansion of physical infrastructure, property, and equipment. It is also responsible for analyzing and determining the allocation of positions necessary for optimal operation in medical units subject to construction, whether new or expanded and remodeled. The specialization of its functions, through the analysis of rational information, finally in late 2007 and early 2008 led to the founding of the "Hospital without bricks", in which seldom-used spaces in hospitals were reclaimed, and beds from low-demand services were turned into beds for services with higher demand. By the end of November 2011 they had recovered 1483 beds and transformed another 761, equivalent to building 15 model hospitals of 144 beds, with a savings of 11,385 million pesos. These actions helped increase the number of assigned hospital beds per 1,000 family medicine enrollees from 0.82 in 2006 to 0.84 in 2012.2

This program represents significant financial savings for the Institute, both in physical investment, and in equipment, furniture, and human resources, in addition to the maintenance and upkeep of the property.

Redesigning the hospitalization process is possible using the analysis of occupancy rates and the use of existing spaces, to reorganize the number of beds and optimize the use of critical services. In conjunction with other programs such as the Low-Risk Puerperium program, Short-Stay Surgery, and the Admission Hall, the success rate can rise to 100%.

The "Hospital without bricks" program is thus a mechanism to reduce saturation in critical areas and increase the availability of beds in inpatient services.

The "Hospital without Bricks" is developed in two ways:

This method offers the advantages of immediately improving the rate of hospital occupancy by division and adjusting the number of beds to the hospitals’ real needs, in addition to the following benefits expected:

The Coordinación de Planeación de Infraestructura Médica made the national diagnosis and analysis of data from existing infrastructure in each specialty by delegation based on the occupancy rate, the number of beds susceptible to transformation according to the trend over the last 5 years, the availability of confined spaces to recover beds, and the cost estimate of work as well as the equipment and number of positions for its operation. The analysis of the information, in addition to productivity and technical-medical feasibility solidified the diagnosis and determined the activities to be developed in the project, as well as the priorities for delegations and hospitals with greater deficit of hospital beds per 1,000 enrollees (Table I).


With this framework there was a better understanding of the behavior and requirements of each delegation and hospital in the project. Some units could finance the construction work and equipment with their own resources, and they designed the medical and architectural programs.

Moreover, it is relevant to mention that the 96% operation of the program was due to the methodology used by the Coordinación de Planeación de Infraestructura Médica, with the various structures of the Institute, to gather information and develop the project, and thanks to the interest and enthusiasm of the delegation and medical unit managers for participating in the program.

The program was created in late 2007, began implementation in 2008, and concluded in 2011. 35 of the 38 delegations of the Instituto Mexicano del Seguro Social participated in the program. The initial goal was to recover 2327 beds, with a request for 2012 positions, construction and/or equipment and furniture, which was approved by each delegation and validated by the Normativa de Planeación de Infraestructura Médica. By 2011, a total of 1483 beds were recovered, the delegations with the most recovered beds were: Estado de México East (140), Baja California (131), Jalisco and northern Veracruz (115), Nuevo Leon (81), Tamaulipas (76), Sonora (69), and Yucatan (60) (Figure 1). 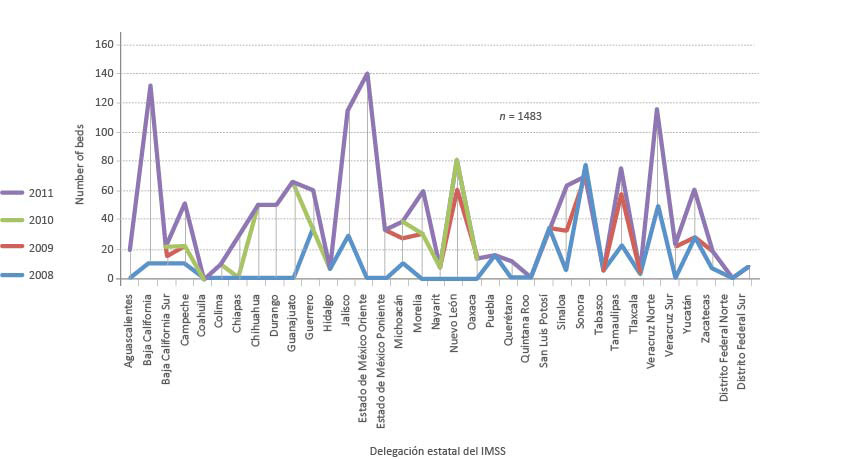 Figure 1. Beds recovered in ordinary regime with the "Hospital without bricks" program (2000-2011)


The reorganization of specialties forced a rethinking in the quantity and quality of existing human resources by specialty, so the actual need for specialist medical personnel positions in internal medicine and surgery was determined, as well as for nursing staff. The covering mechanism was the reorganization and transformation of positions, which meant reducing positions for pediatricians and obstetrician-gynecologists, and increasing positions for internists and surgeons. Regarding nursing positions, the number of professional staff was increased and the nonprofessionals were decreased. In both cases the requirement was supplemented with the authorization of a total of 2275 newly-created positions to operate the strategy, ending in December 2011.

Undoubtedly, the strengthening of the Instituto Mexicano del Seguro Social in this area of ​​medical infrastructure through the "Hospital without bricks" program is the result of institutional effort and the strategic decision to respond to the challenges that the enrolled population demands, as a true reflection of care needs in keeping with new demographic and epidemiological health profiles. But above all, this program allows the efficient use of available physical resources and in the short- and medium-term meets the imperative need for hospital beds for hospital services with the greatest demand.

In particular, the benefit for nursing staff involved in the hospitalization process is through rearranging services with lower demand with those of higher demand, allowing nursing administrators and clinicians to have an efficient distribution of human resources in areas where it is most needed, resulting in better organization, and therefore better care.

In general, the cost-benefit of the "Hospital without bricks" program represents real financial savings for the institution, in physical investment, human resources, and equipment and furniture alike; however, the increased demand as a result of the dynamic epidemiological profile of the enrolled population is a latent threat, and as the same trend continues, available resources will always seem insufficient.

Hence the importance of the Institute’s work in parallel on strengthening primary care, focusing on disease prevention and detection, and the inclusion of multidisciplinary health teams with the skills necessary for this purpose. This is essential for the continuous improvement of medical processes and thus of services provided to IMSS enrollees.