Mystic of the nursing profession


Mystic of the nursing profession

Nursing profession is socially identified by human relationship that takes place with people of all ages who are cared for by nurses. From its inception, nursing has been characterized by the interest of care to another, hence the importance of reflecting about its particularities. Among those particularities, mystic acquires special significance, it is a word that has different interpretations: education, mystery, profession, spiritual life, contemplative life. Mysticism in the nursing profession is gradually developed during the period in which students take formal studies. There are various actions performed for the student to identify himself with the career, one of them is the pinning Ceremony “Paso de la luz”, which began at the National School of Nursing and Obstetrics at the National Autonomous University of Mexico and has been replicated in many nursing schools in Mexico over the years.

The nursing profession is characterized by the relationship established with humans, in situations of both health and disease. This relationship requires scientific knowledge, as well as the art of approaching the other to provide help; it demands that the knowledge of nursing care be learned by each class that undertakes the formal study of the profession. Hence the importance of talking about the mystique of the nursing profession.

A reflection on the concepts of the nursing profession and its characteristics is intended to highlight the importance of passing the light as a mystical ceremony, symbol of the union between the scientific knowledge and the art of nursing care, with which it is hoped to communicate the importance of the profession to the students, future professionals.

The mystique is invisible, it is the spirit of the nursing community that cannot be proven but that is necessary for the cohesion of the profession with society, which gives meaning to the union of art with knowledge; of being and doing. In the Ceremony of the Passing of the Light, this cohesion is represented by a lamp that persists and will persist as the hope of the ailing human being and the nursing profession itself.

In the development and evolution of the different societies that have existed since the time when man appeared until today, in order to survive, humans have needed various activities related to life itself and to the construction of the present, which in an instant becomes the past, and the future.

The word profession (profesión) comes from the Latin professio, -onis, action and effect of professing;1 its antecedents are found in ancient Hebrew texts that say it was a word used in connection with priestly functions, activities in service of the king or a royal official; "The word means to send or dispatch, which represents accomplishing a mission".2 It is in the nineteenth century when the word begins to take on a greater significance in society and the relationship of humans with life, being and doing; in the twentieth century its use reaches a peak.

Max Weber3 considered that "profession was linked to religion in the Christian tradition, since the act of professing is related to the desire to consecrate themselves to God, to obey a superior being, with a high content of asceticism, surrender, and suffering". In 1953, Cogan4 commented that "profession had an ethical obligation to provide altruistic service to the customer"; "its definition was based on the theoretical comprehension of assignations of some areas of specific knowledge and skills".5

The word mystique (mística), according to the dictionary of the Real Academia Española, is the part of theology that deals with spiritual, contemplative life and the knowledge and direction of spirits, experience of the divine. It is related to the old French word mestier, today metier, trade, profession, or occupation. Its distant ancestry comes from the Greek myein, meaning to enclose, such that mystikos means closed, mysterious; meanwhile, the verb myo means to close and mystes, to receive an education.

Therefore, by mystique one can interpret the secrets of a profession or trade learned by practice; it is the art that gives knowing to practice. If knowing is understood as knowledge, this implies that there is knowledge that cannot be transmitted through books, written documents, or verbally, but only through rituals accompanied by symbols that contain relevant meaning for a profession.

A rite (rito), according to the Real Academia Española, is a custom, a ceremony that forms part of a series of actions and attitudes marked by a symbolic value, which usually finds its meaning or purpose in the context of a community or a profession, and which are taught from generation to generation, but without those who do them making an effort to create them, rather continuing in the direction of transcending and not forgetting the essence, origin, and commitment to society.

Nursing as a profession

The nursing profession has been built over time. Its beginning dates back to the nineteenth century with Florence Nightingale, who started the formal integration of nursing. With the contribution of enthusiasts of this discipline at the beginning of this century, it has become the profession of the future.

According to Ellis and Hartley, professions must have seven characteristics:7

Mystique of the profession

The preceding paragraphs have identified some characteristics of the nursing profession, while it has been stressed that certain qualities must come together for the bond with society. One is its essence, which involves giving cohesion, an explanation of being, that when coupled with knowledge, provides a sense of unity and responsibility; this is the unwritten part, in the mind and heart of each professional act.

"It should be noted that nurses see the human being as a biological, psychological, social, family, and spiritual being, where the person is, among other things, a transcendent or spiritual being";15 "spirituality belongs to the inner sphere of man and conscience or sense of self in the universe".16 These concepts imply that in the nursing profession there are actions, deeds, and needs invisible to the profession itself that need to be communicated even if they are not related to a scientific fact, as "they go beyond the profession and are united with something transcendent, immaterial, and with nature itself, all of which forms part of the context called the spiritual paradigm".17 "The spiritual is the whole field of thought concerning moral values ​​over the course of life",18 which in nursing is acquired in daily contact with humans.

This is what is passed down from generation to generation to students at the Ceremony of the Passing of the Light that takes place at the Escuela Nacional de Enfermería y Obstetricia of the Universidad Nacional Autónoma de México, symbolizing the accomplishments made during professionalization and academic training and what it says about the discipline of nursing. This ceremony signifies the union of the objective with the subjective, the scientific with the human, the art of care of human for human, the beginning of the road of the profession, its development, the relationship between being and what should be.

This ceremony commemorates the start of the nursing profession: Florence Nightingale, the lady with the lamp, the oil lamp- which always accompanied her on her night trips to watch over the soldiers of the Crimean War- and its small screen, guarding the candle flame so it did not die. The representation symbolizes hope, welfare, and not feeling alone in moments of anguish and suffering, and the effort to help others.

In 1853 Florence Nightingale initiated major changes in English nursing and 100 years later, in 1953, at the Escuela Nacional de Enfermería y Obstetricia, the Ceremony of the Passing of the Light was inaugurated, during the leadership of Dr. Emilia Leija Peace Ortiz, organized by professors of nursing Sara Alicia Ponce de Leon, Esperanza Martinez, and Ercilia Islas in the Amphitheater "Simon Bolivar", a ceremony that at its initiation was performed in the former Escuela de Medicina, current Palacio de la Escuela de Medicina (the place that housed the teaching of that profession), and that over the years has become a tradition.

The establishment of this ceremony in the highest seat of learning was emulated by many nursing schools, both in the capital and several states of the Mexican Republic.

Mexican nurses, who in the twentieth century took up the challenge of this profession at the opening of the Escuela de Enfermería del Hospital General de México in 1907, were those who began the ceremony that with the passage of time has become a legacy for the generations, a solemn and mystical ceremony of this humanistic profession.

Therefore, the nurses performed the "Ceremony of the passing of the light as the symbolic transmission to new generations of the science and art of care in the service of humanity, and of the professional values ​​that humanize their actions and form ethical conscience that shows us as a substantial part of a professional group. Who receives the light takes on their conscience, preserving the mystique and the values ​​of a profession deeply committed to that which is human".19

From the moment that Florence held the lamp to watch over and observe the sick at night, this object became an international symbol that represents the light that would illuminate the awakening of nursing as a profession. "Nightingale's lamp became the emblem of the profession, symbolizing on the one hand, hope transmitted to the wounded of Crimea, and, on the other, culture and study".20

The lamplight symbolizes the strength, faith, and hope required in professional activities and all acts of care of another human being. In the hands of current students, soon to be nurses, it must endure and be kept alive to light the practice of the profession with increasing dignity, backed by knowledge and knowhow, as nurses able to care for those in need, with intelligence, skill, and humanity resulting from continuous study and dedication to the care of others, which is rewarded by the infinite satisfaction of accomplishment.

The light from the lamp represents the seal of ethical commitment that is acquired and that will endure along the path of the profession, symbolizing the work of Nightingale; it is the symbol of clarity and knowledge, the search for truth and academic excellence.

The young profession of nursing is characterized by infinite qualities aimed at care for humans based on scientific knowledge. As a human profession it requires considering the spirituality of the person, reflected in its mystique, teaching the profession to students who are trained in different schools and universities every day. The Ceremony of the Passing of the Light is one of the symbolic rituals representing this mystique (Figure 1). 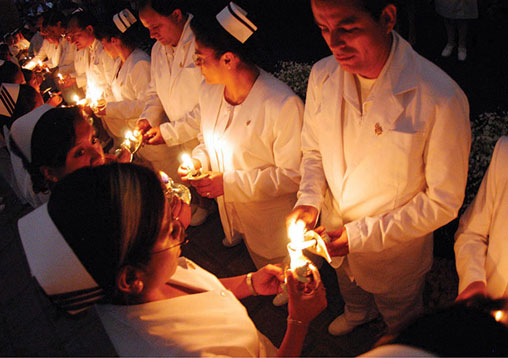 The authors declared that there is no personal or institutional conflict of interest of a professional, financial, or commercial nature, during the planning, execution, writing of this article.