Introduction: At the start of training occur several life risks that favor or affect resilience which is the ability to cope with adversity during the development of life.

Objective: To determine the relation among resilience and life risks factors at the start of professional training.

Results: Health Sciences Center freshmen students show a favorable level of resilience, high risk of STI, responsible alcohol consumption and low tobacco dependence. According to Chi Square test of Pearson there is no relation between resilience variables and alcohol, tobacco and STI with p value of 0.391, 0.951 and 0.787 with significance of 0.05.

Conclusions: According to the results of this research, being or not being a resilient person is unrelated to dependence on harmful substances or hazards to life that affect professional training.

The concept of resilience alludes to the readiness of a person to face the adversities of life, overcome them, and come out transformed by them. Various studies have been done determining the protection factors that stimulate the bio-psychosocial development of people, such as self-esteeem, morality, humor, and critical thought, which Emmy Werner called pilars of resilience.1

Regarding individual qualities, numerous studies have focused on the internal qualities that resilient people possess.

Of these findings, particularly Wolin and Wolin in 1993 refer to the pilars of  resilience, which show the qualities of resilient people in a figure called the Mandala of resilience.2

The Mandala theory of resilience picks up on factors described by Werner:  Introspection refers to the ability to comprehend qualities of oneself and others, and to reflect in an active, personal way about life expereince. Interaction is the ability to establish intimate, satisfactory ties with others, and balance the one’s own need to empapthize and the ability to give back to others. Initiative is the pleasure of exerting and putting oneself to the test through progressively demanding tasks. Independence is the capacity to establish limits between oneself and adverse environments, alluding to the ability to maintain a healthy emotional and physical distance without isolation. Humor is the ability to find comedy in the tragic, mix the absurd with horror, a ludicruous combination. Creativity is creating and innovating the personal, the familiar, the artistic, the scientific and the social, transforming reality by solving problems. Morality is the desire for a satisfactory, internally rich personal life, and refers to the moral consciousness, the capacity to commit oneself to values and distinguish good from bad (Figure 1). 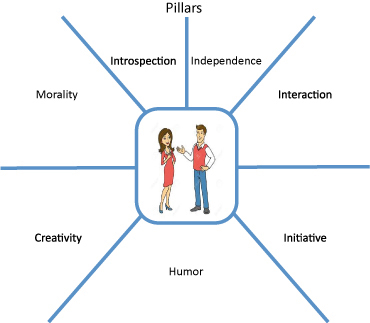 
Resilience is an educational intervention technique, essentially a new view of an old human problem. Risk has always been present and, from a pedagogical perspective, is necessary to study all the protection factors that permit people to confront risk and come out on top. For resilience processes to occur, interacting with both risk and protection factors is unavoidable.

Risk factors refer to those characteristics or qualities of a person, family, or community that have a high probability of damaging health. Risk factors stand out as being both environmental and proper to the individual they affect. The analysis categorizes four types of risk factors:  the first is a disturbing situation such as a psychological disorder, parental addictive behavior, death of a parent or long separation from a caretaker (attachment figure) in the child’s early years; the second addresses social and environmental factors such as parental unemployment, poverty or lack of money at home; the third factor describes the chronic health problems in the child's immediate environment; and the fourth is a natural and social catastrophe, for example, a war.

Protection factors refer to influences that modify, change, or improve a person’s response to danger when it tends towards a maladaptive outcome. Sometimes even an unpleasant event may be a protective factor when as a result, an individual learns mechanisms to adapt, strengthen and learn to live under pressure. Among the qualities that protect individuales from adversity are those which are part of an intra- and extrafamiliar environment which optimally interacts with and influences personal development, like inner qualities such as invididual abilities that protect people.3,4

Analysis of risk in professors’ and students’ lives, like the detection of risk factors, has contributed to discouragement in children and young people, who have even come to think that generalized risk factors in childrens’ lives inexorably condemn a growing number of young people to develop negative consequences, like: dropping out of school, low achievement, addiction, and sexually transmitted infections.

In this regard, levels and sources of resilience were identified and compared in a student population. Results showed significant differences in resilience sources for  men and women, and resilience being greater in women. Another study related it to happiness and optimism, determining that students with higher resilience levels showed more optimism and happiness. Finally, in a qualitative study, difficulties in the academic process were found likely to produce resilience in nursing students. Problems affecting student training were classified in the following categories:  economic, personal, organizational, social, academic, and other problems.5

This research was conducted in order to determine the relationship between the ability for resilience and risk factors in university students at the beginning of their professional training. It is our hope that intervention strategies and health education programs will result from this contribution to knowledge about students' life risks. Implementing such programs within the university allows for the development of young people, and as a result also their quality of life in the short and medium term, reflected in the final outcome, and in the long-term resulting in their projection as healthy and competitive people living up to their maximum productive potential.

A correlational descriptive study in a non-probalistic sample (for convenience) of 308 new students of the Centro de Ciencias de la Salud at the Universidad Autónoma de Aguascalientes in Aguascalientes, Mexico.

The pilot test used the following instruments: Resilience questionnaire, AUDIT6 (Alcohol Use Disorders Identification Test), and Fagerström Test to measure nicotine addiction level and STIs. The reliability coefficient obtained was Cronbach's alpha of 0.88, 0.95, 0.90 and 0.86, respectively, for each of the questionnaires.

New students at the Centro de Ciencias de la Salud were included. Students absent the day that the instruments were applied and those who wished not to participate were excluded. Questionnares answered incorrectly or incompletely were eliminated. After this, a database was created to record and analyze the information using the statistics program SPSS version 21.

More than 50% of the new students were female. Their ages vary between 17 and 25, with 18.82 years the average. A prevalence of 98.1% students were single and for 79.5%, their only occupational activity was their studies. 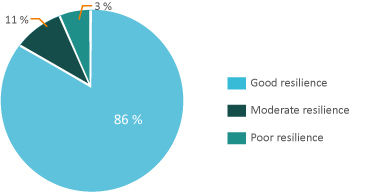 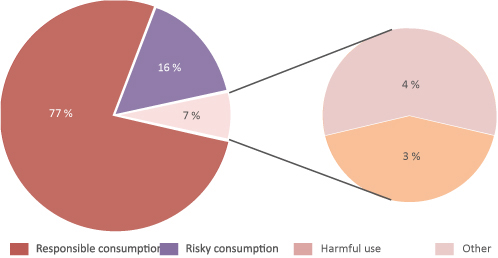 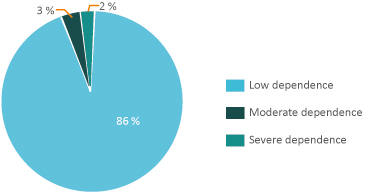 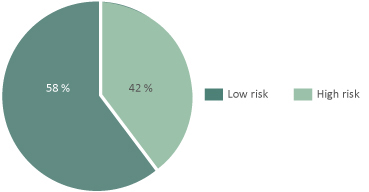 
It is noted that resilience is favorable in relatively optimum conditions regarding responsible alcohol consumption, and low tobaco dependence; despite positive resilience, the risk of STI is high. No correlation is detected between resilience variables and alcohol, tobacco and STI, with p-value equal to 0.391, 0.951 and 0.787 and significance level 0.05 (Table I).

90% of students present positive resilience, differing from López’s findings of medium resilience.7 On the other hand, they coincide with those of González,8 who found a group of young adults to have high resilience.

Regarding STI risk, Rodríguez9 found that 45% of students have knowledge about methods of STI prevention.

According to data obtained in this investigation, 30.4% of the study population reported alcohol consumption two to three times a week, while 1.6% reported consuming four or more times a week, which represents a high risk factor. This coincides with Mora,10 as in their study 31% of the study population reported heavy drinking. It also differs from another study, where 98.5% consumed alcohol at some time, 63.3% consumed more than one drink, and 37.7% denied alcohol consumption.11

Since a majority of students of the Centro  de  Ciencias  de  la  Salu had positive resilience, low tobacco dependence and alcohol consumption; we expect that there is a relationship among these variables.

However, Pearson’s Chi-squared Test found no relationship. In other words, it is not necessary to be a resilient person to have a low dependence on the consumption of harmful substances, called a danger to life and which directly affect their professional inception; therefore the null hypothesis, which states that there is no relationship, is accepted.
The results report a high risk of STIs because, although higher percentages of positive information and knowledge of STIs are present, they do not safeguard against unprotected sex.
Nursing staff can use these results to design and implement educational programs, such as tutorials, offered to university students throughout their professional training, with the expectation of improving personal development for graduating professionals.