How to cite this articleo:

Introduction: Aging is a process of progressive changes that affect physical functioning, and this is the best health indicator of the adult population.

Objective: To make a diagnosis of the functional capacity of older adult residents of nursing homes in southern Jalisco.

Methodology: A cross sectional, descriptive, prospective study in older adults was conducted, in whom Barthel scale was used to assess their ability to perform ten basic activities of daily living. The sample was not random for convenience. Informed consent was obtained. Descriptive statistics were used, chi-square test for comparisons between sexes. Differences were considered statistically significant at p ≤ 0.05.

Results: The sample consisted of 111 older adult. The mean age was 81 years, 27.9 % showed complete independence, 28.8 % mild dependence, 14.4 % moderate, 18 % severe and 10.8 % total dependence. There was no statistically significant sex differences (p = 0.36). The basic activities with the highest number of total independent subjects were eating, grooming, dressing, micturition and defecation continence, moving and walking; going up and down stairs and bathing were activities in which subjects showed more total dependence.

Conclusions: 72.1 % of older adult had some degree of functional dependence, which represents an opportunity for nursing care.

Aging is an intrinsic gradual process that forms part of the natural biological cycle that occurs in all living things with the passage of years, such that the human being too is immersed in it.

The population dynamics of recent years have undergone changes such as the significant increase in older adults, which has been influenced by a combination of increasing life expectancy with the continuing decline in fertility.1

The physical functionality of the older adult is the sum of abilities to do for themselves activities indispensable to meet their needs. The dependence of any of the basic and instrumental activities of daily living is associated with increased mortality in older adults. The geriatric functional process begins when an independent older person develops limitation in their functional reserve, manifested by a state of vulnerability that results in disability.3,4

An older adult is considered any person aged 65 or more, however, in Mexico, the age threshold is lower: 60,5 so by 2030 it is expected that the older adult will represent one in six Mexicans, and by 2050, more than one in four.1,4

The Encuesta Nacional de Salud 2012 (ENSA 2012) identified that the group of older adults concentrated the majority of people with disabilities in the country, with social, economic, and cultural consequences resulting from the aging population. The conclusion was that these problems will intensify in the coming decades because the increasing number of older adults will also increase the prevalence of disability.6

Quality of life tends to be lower as people age, and it depends largely on the ability to perform basic activities of daily living, which gives the individual physical and functional independence.9,10

The Barthel Scale is a tool to quantify the degree of functional autonomy of older people who are in their community or confined in nursing homes, by measuring their ability to perform 10 basic activities of daily living.11,12 It is a widely-used instrument and one of the best for monitoring the functional dependence of people.13,14

In Southern Jalisco there are several institutions that house older adults; however, in some of them care is provided by non-specialized personnel, a situation that presents the nursing professional with a field of opportunity at both community and institutional levels.

The diagnosis of physical dependence or independence level allows effective interventions, as there are risk factors prone to prevention15,16 to slow the cognitive and functional impairment of the older adult17,18 by providing nursing care with quality and warmth.

The aim of this study was to conduct a situational analysis of physical functional capacity to perform activities of daily living using the Barthel Scale in older adults living in group homes and nursing homes in southern Jalisco.

The sample was non-random for convenience. The study included individuals with tenure of at least three months in the group home, without communication problems, and whose participation was entirely voluntary.

The statistical design was univariate: the only dependent variable was the functional capacity of the older adult at the time of interview. By its nature, the variable was qualitative, and its indicators were the different weights of the instrument. Descriptive statistics (frequencies and percentages) were used, and chi-squared for comparisons between the sexes. Differences between groups were considered statistically significant when p ≤ 0.05 was obtained.

The study was conducted in accordance with the international guidelines of the Declaration of Helsinki21 and the Ley General de Salud Mexicana en Materia de Investigación en Seres Humanos, Articles 13, 16, 17 and 20,22 which relate to the protection of the rights, information, welfare, and the protection of the privacy of respondents. The study was considered without risk because no intervention was performed nor was physiological variables changed. The results obtained were released to the authorities of each of the nursing homes at the end of the investigation.

Older adults who had 100 points in the Barthel scale were considered totally independent subjects regarding functional capacity for self-care and movement by themselves. Those who scored 95-60 points were rated as mildly dependent, that is, they are able to perform most of the basic activities of daily living with minimal assistance and require partial support to perform tasks that they cannot do alone. Those who scored 55-40 points were considered moderately dependent, as they constantly need the support of another person or caregiver to perform basic activities. Those who scored 35-20 points were functionally incapable of doing most basic daily activities for themselves and were classified as severely dependent. Finally, people unable to perform most daily activities and generally living bedridden or in a wheelchair were categorized as totally dependent; these older adults got a weight of less than 20 points (Figure 1). 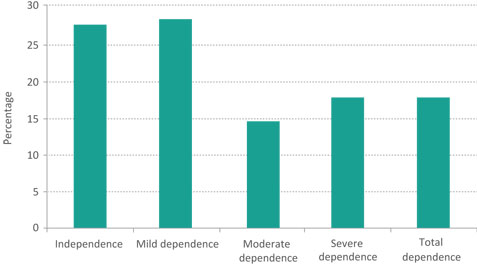 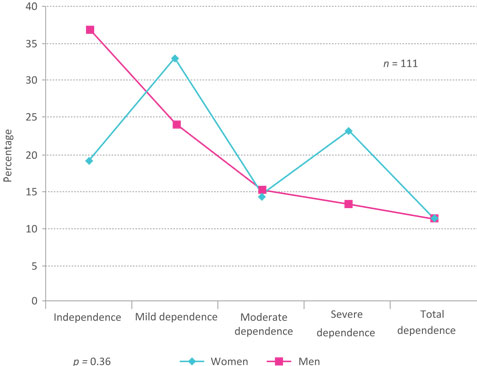 
Statistical analysis was done of the differences in physical functioning between men and women:

Although the proportion was higher in functional individuals, the differences calculated with chi-squared were not statistically significant (p = 0.36).

In assessing the 10 basic activities of daily living with the Barthel Scale, the functional capacity of people was identified with the following results: older adults showed higher total independence in eating, hygiene, dressing, bladder and bowel control, moving, and walking. By contrast, they showed higher total dependence for bathing and going up and down stairs (Figure 3). 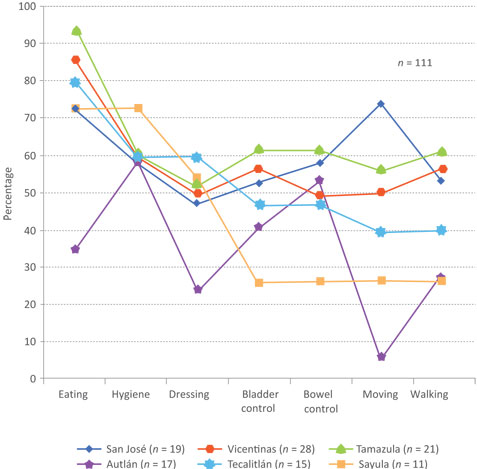 Of the older adults in the study, 72.1% showed some degree of dependence, at a higher ratio than that reported in the Encuesta Nacional de Salud.6 The explanation is the nature of the sample: this study was conducted with older adults who were in a care institution where there are rules and regulations for performing certain activities such as eating and bathing, among other daily activities.

As for marital status, the highest frequency corresponded to widowhood; apparently losing one’s partner occasions some degree of neglect by the immediate family, and older adults are sent to these institutions, where care depends on unrelated people.

Older adults identified with mild dependence constituted the largest group (28.8%), similar to that reported by Velasco et al. in a study in Colima with 149 older adults at four care institutions.11 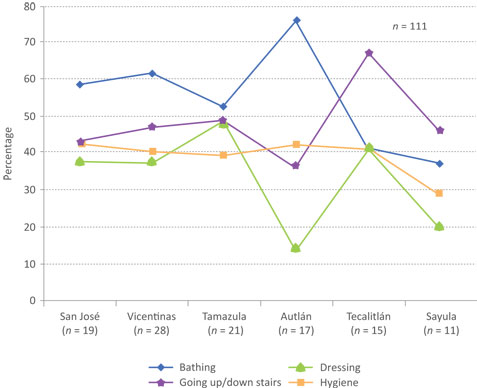 
A requirement for admission in some care facilities is that the older adult must retain a degree of independence; if in the course of their stay they present an alteration that makes them dependent, they are still housed until they leave because of death or to return to their families, which usually does not happen.

The ratio of total dependency was 10.8%, lower than that found by Velasco et al. (12.2%).11 The institution with the most dependent adults with was located in Tecalitlán, Jalisco.

Moderate dependence was observed in 14.4% of the population sampled, lower than that reported by Velasco et al. (29.9%).11 This was presented equally in men and women.

Severe dependence was the least observed; 13/20 were women. The largest number of individuals in this condition was found in the Casa Hogar Vicentina, unlike Casa Hogar Maria Auxiliadora Sayula, where none were reported.

The Barthel Scale is a useful tool and easy to apply and interpret, suitable for the nursing professional - whether through interview or direct observation- to perform the situational analysis on the functionality of the older adult, which is considered the best indicator of health in this population group.

It is important to note that 72.1% of the sample had some degree of functional dependence, so it is recommended to work in multidisciplinary teams with activities that promote the integral development of the older adult, including physical exercise, as this can improve, maintain, or delay the onset of musculoskeletal, cardiorespiratory, metabolic, and depressive problems, and allow the individual to socially integrate into the community within their abilities and to improve their quality of life.

With older adults identified as independent, they should perform physical and psychosocial activities to slow the natural process of dependency.

For nurses, care of the older adult should be an intercultural experience of a global nature, so the desired skills should be those that enable them to implement effective interventions grounded in scientific knowledge, applying ethical, humanized, and social principles, which comprise preventative, curative, and rehabilitative activities carried out with quality and warmth, without losing sight of the ultimate goal, to improve people’s functionality.

To achieve this it is necessary to have strategic alliances, networks, and cooperation to share, broaden, and disseminate this knowledge, so that the various sectors involved benefit, particularly those responsible for decision-making in institutions for the care of older adults, in order to strengthen the infrastructure and implement measures to facilitate the functionality of this population group.

For their part, nurse training institutions must promote the creation or expansion of programs such as master's degrees or specialties in geriatrics or geriatric gerontology, for the training of human resources to meet the increasing challenges of the demographic landscape looming in the next years.

For nurses, nursing homes and older adult care homes are spaces for learning, responsible participation, and free exercise of the profession, which can continuously feed the processes of discipline development, promoting the generation of new knowledge and improving the quality of nursing care.

A limitation of this study was its descriptive nature without nursing intervention. It is desirable that research should be done in the future resulting in interventions focused on prevention and detection.

The authors declare that there is no personal or institutional conflict of interest of a professional, financial, or commercial nature, during the planning, execution, writing of this article.